Kim Kardashian and Kanye West have opened the doors to their futuristic Los Angeles mansion, giving fans an intimate look inside the incredible concept home.

Covering March’s edition of Architectural Digest, the couple shared photos of their minimalist Hidden Hills estate after spending four years, and millions of dollars, transforming it into their dream home.

Having first glimpsed the $20 million property on a walk with an infant North in 2013, they embarked on total renovations, eventually moving in four years later, in 2017.

Minimalist: Kim Kardashian and Kanye West have opened the doors to their futuristic Los Angeles mansion, giving fans an intimate look inside the incredible concept home as they cover March’s edition of Architectural Digest

‘Crazy lives’: Kim said that she and husband Kanye West were so busy, that they needed the calm oasis to come home to. They share the home with children North, six, and Chicago, two, and sons Saint, four, and Psalm, eight months

One of the alterations they made was to dig up the already idyllic two pools at the property, and put in a large new pool, at an estimated cost of upwards of $50,000.

However, whilst taking part in a Q and A for Architectural Digest’s website, Kim, 39,  admitted she had yet to try out the relocated pool.

Visibly shocked, Kanye, 42, queried: ‘What?’ as Kim responded, ‘Yeah, can you believe that? But I love our pool’, adding: ‘You know we don’t have a Jacuzzi?’

Addressing the camera, Kanye added in an amused tone: ‘Can you believe that, can you believe we don’t have a Jacuzzi?’ before revealing that he made the decision not to install one because it would look ‘weird’.

Family time: Kim and husband Kanye West interviewed each other for an Architectural Digest Q and A, with North gatecrashing to join the fun

Kim revealed that as a compromise, they heated up the whole pool, joking to Kanye: ‘It bothered you so much, but the kids love to swim in a jacuzzi.

Despite not getting her Jacuzzi she wanted, Kim confessed she did admire the way Kanye’s pool looked, with it’s ‘really long front stair’ where the children can play: ‘It’s not the deepest pool so the kids just love it.’

Child friendly: Talking of things the children love, both Kim and Kanye were at pains to explain how they merged their love of high design, with keeping the property child friendly

Adorable: North also utilises the space for her many hobbies, with the youngster seen interrupting the interview to reel them off, explaining: ‘Gymnastics and cartwheels, dance competition, play the piano, do my violin’

A place to call home: Previously, Kim has showed off her kitchen; the plants are in Shiro Tsujimura ceramic vases

Master bathroom: Kim and Kanye revealed the bathroom is one of their favourite rooms, but added on an extra eight months to their renovations after Kim’s mother Kris Jenner said they should expand the space

Clever: Kim previously showed off her bathroom in an Instagram video, but fans were left baffled about how her taps work, so she shared another video tour explaining how the double vanity actually works

Proof: As she zoomed in on the sink, Kim explained how the sloping design allows the water emanating from the faucets to pool slightly and then drain

His choice: In her video tour, Kim also explained that it was Kanye who was responsible for the bespoke lighting in their huge bathroom

Overhead lighting: Instead of individual lights, the whole ceiling is an illuminated panel including the portion that is above the large glass-encased shower

Talking of things the children love, both Kim and Kanye were at pains to explain how they merged their love of high design, with keeping the property child friendly, with Kanye revealing: ‘North was the inspiration for the design of our house.’

The couple are parents to North, six, and Chicago, two, and sons Saint, four, and Psalm, eight months

Explaining the landscaping, on which he worked with Peter Wertz, he added: ‘In the backyard there were all these stairs and we needed the kids to be able to ride their skateboards around, so as many places as I could take the stairs out I did.’

Family based: The couple said their children inspired every part of their custom home as they insisted that despite the sparse design, it is child friendly

Musical: North is already taking piano lessons, and named it as one of her favorite things to do at home

The full estate: Having first glimpsed the $20 million property on a walk with an infant North in 2013, they embarked on total renovations, eventually moving in four years later, in 2017 (the home is seen here in 2019)

North also utilises the space for her many hobbies, with the youngster seen interrupting the interview to reel them off, explaining: ‘Gymnastics and cartwheels, dance competition, play the piano, do my violin.’

Yet despite following their design vision of having a spare and modern space, Kim insisted: ‘In the end, we don’t take it too seriously. We’re not going to be fanatics.’

Kanye added to the magazine: ‘The kids ride their scooters down the hallways and jump around on top of the low Axel [Vervoordt] tables, which they use as a kind of stage. This house may be a case study, but our vision for it was built around our family.’ 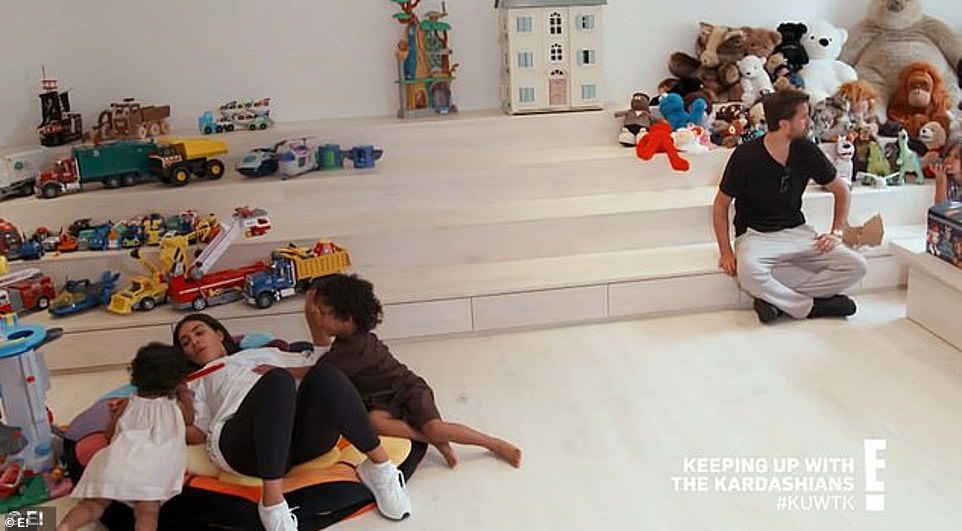 Contained clutter: Kim and Kanye are all minimalist – they just have play rooms to tidy things away; here Kim is seen with Scott Disick in a scene from her family’s reality show 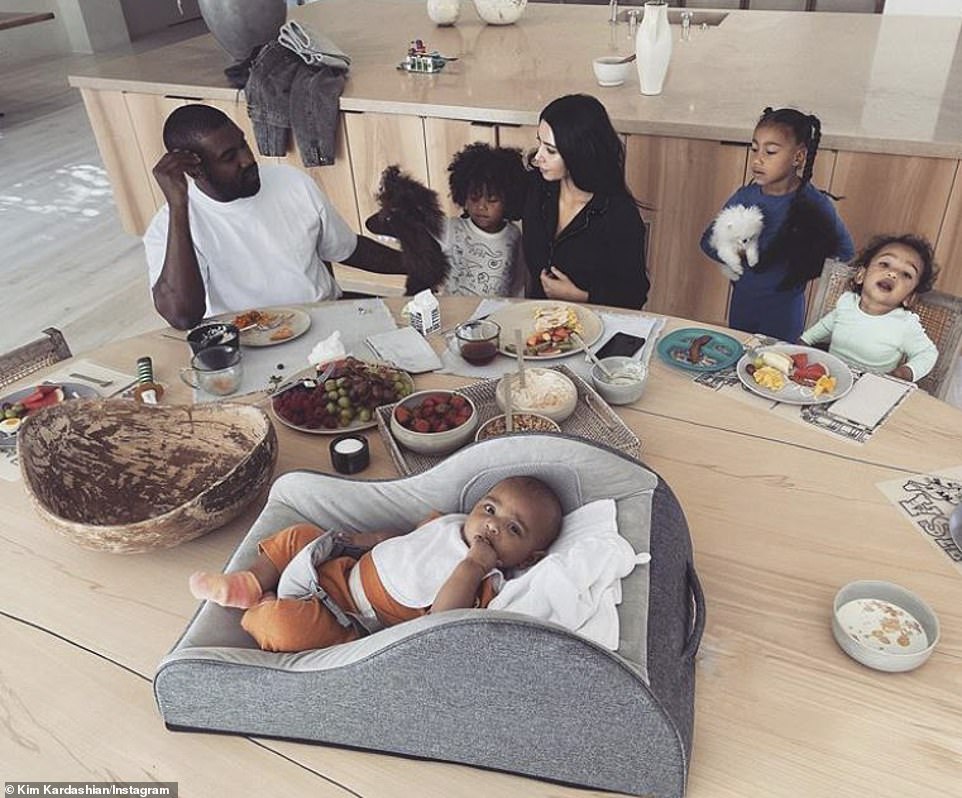 Family time: Kim showed off what a breakfast looks like at the West household last month, revealing that their dining table is so large that it comfortably fits the entire family with masses of room to spare 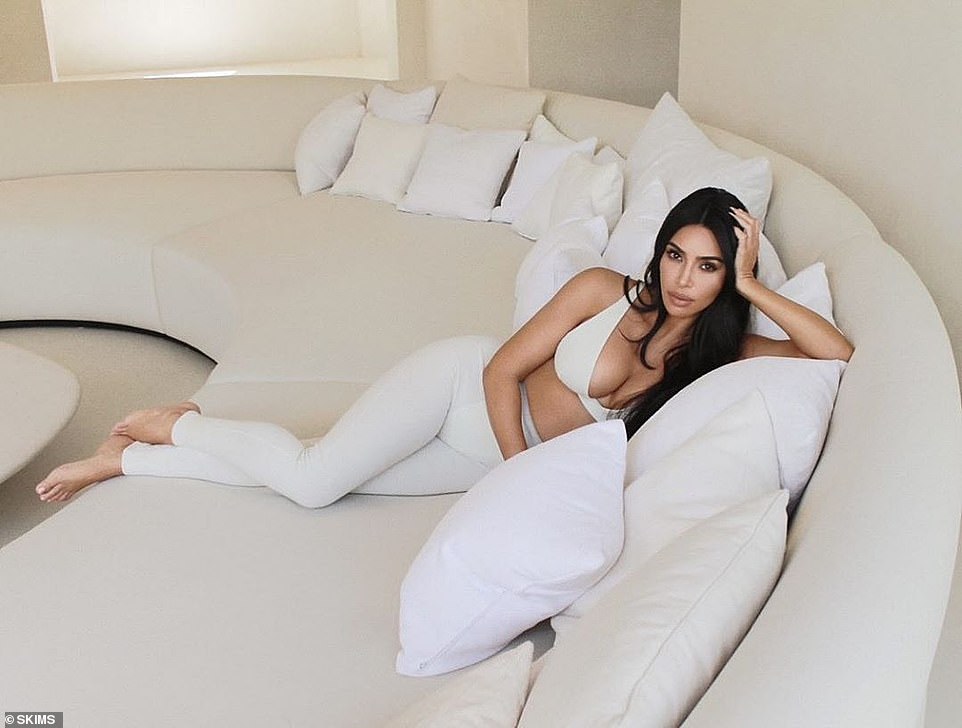 Comfy: Kim is pictured reclining on one of their sofas, after Kanye admitted to selling his first Rolls Royce to buy a Jean Royère Polar Bear couch, which retails for around $600,000 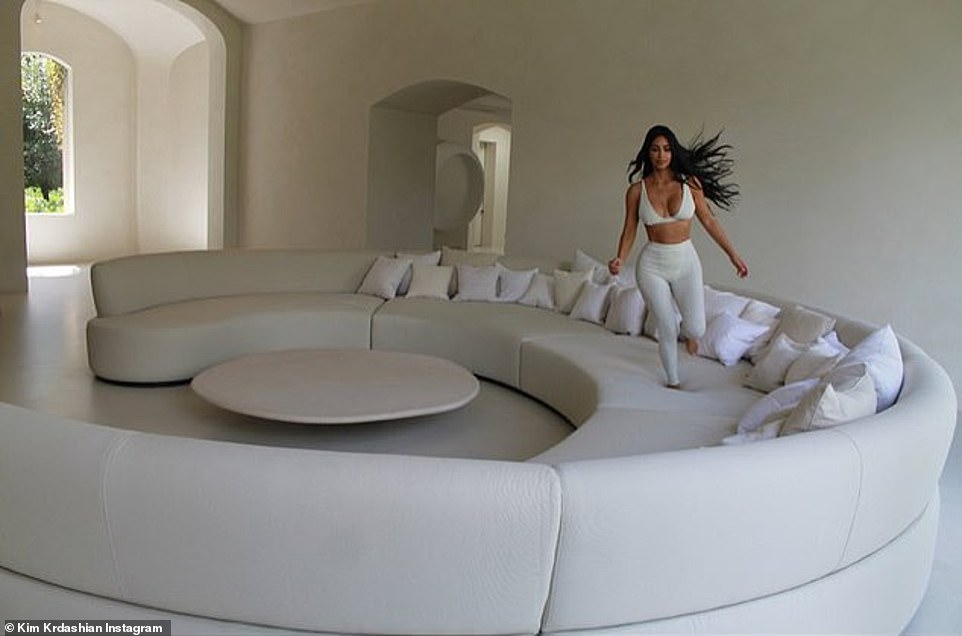 Dancing through life: Kim shared another snap running around her sofa in an Instagram image; the table was designed by Axel and is sued as a stage by her kids 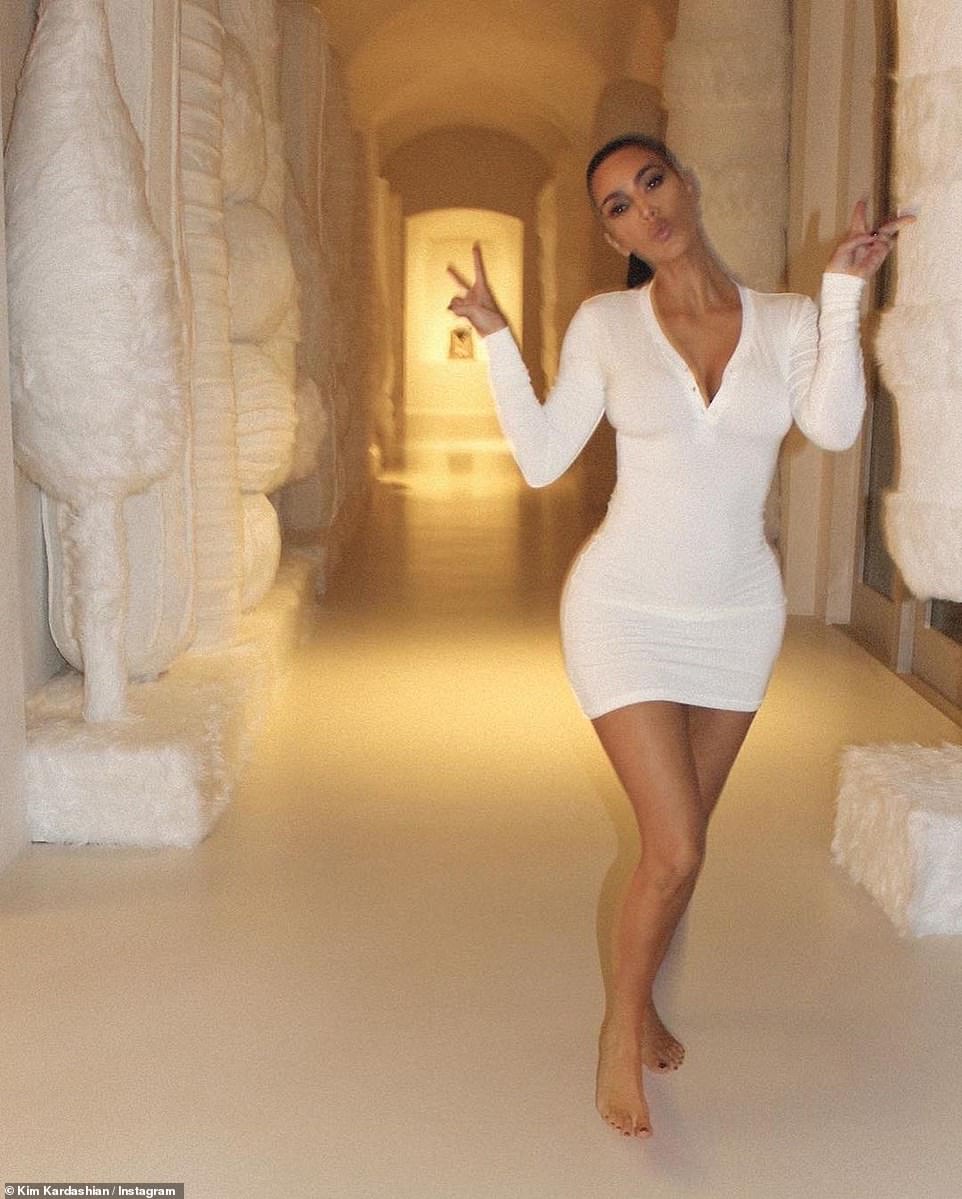 Holiday decor: This corridor is one of Kanye’s favorite spots; and Kim showed off the sprawling space in an Instagram snap shared back in December 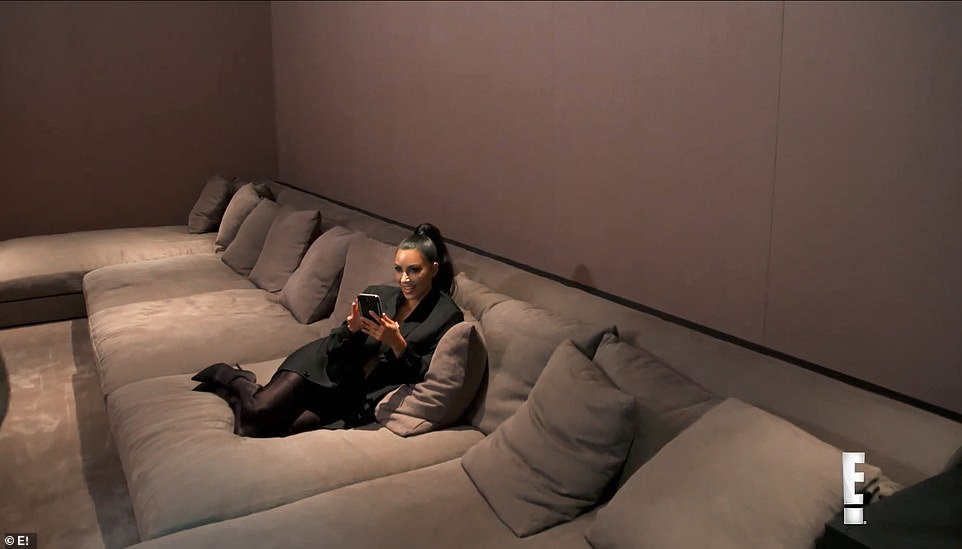 The perfect selfie spot: Kim said she liked taking her picture in the home theatre, which has enough space for all the family to snuggle up and enjoy a movie night together

The couple went on to reveal how they came up with the concept for their huge, glass sided master bathroom, explaining that, like ‘ninety percent’ of the house, they worked on the design with Belgian designer Axel Vervoordt.

‘The bathroom is one of my favorite rooms,’ Kanye admitted. ‘Its the one that’s most similar to our houses in the future, even though it’s square and our houses are more organic.

‘I love how the whole side of the bathroom is just blown out. And that was Kris’s [Kim’s mother] idea, she was like, you guys need a bigger bathroom.’ 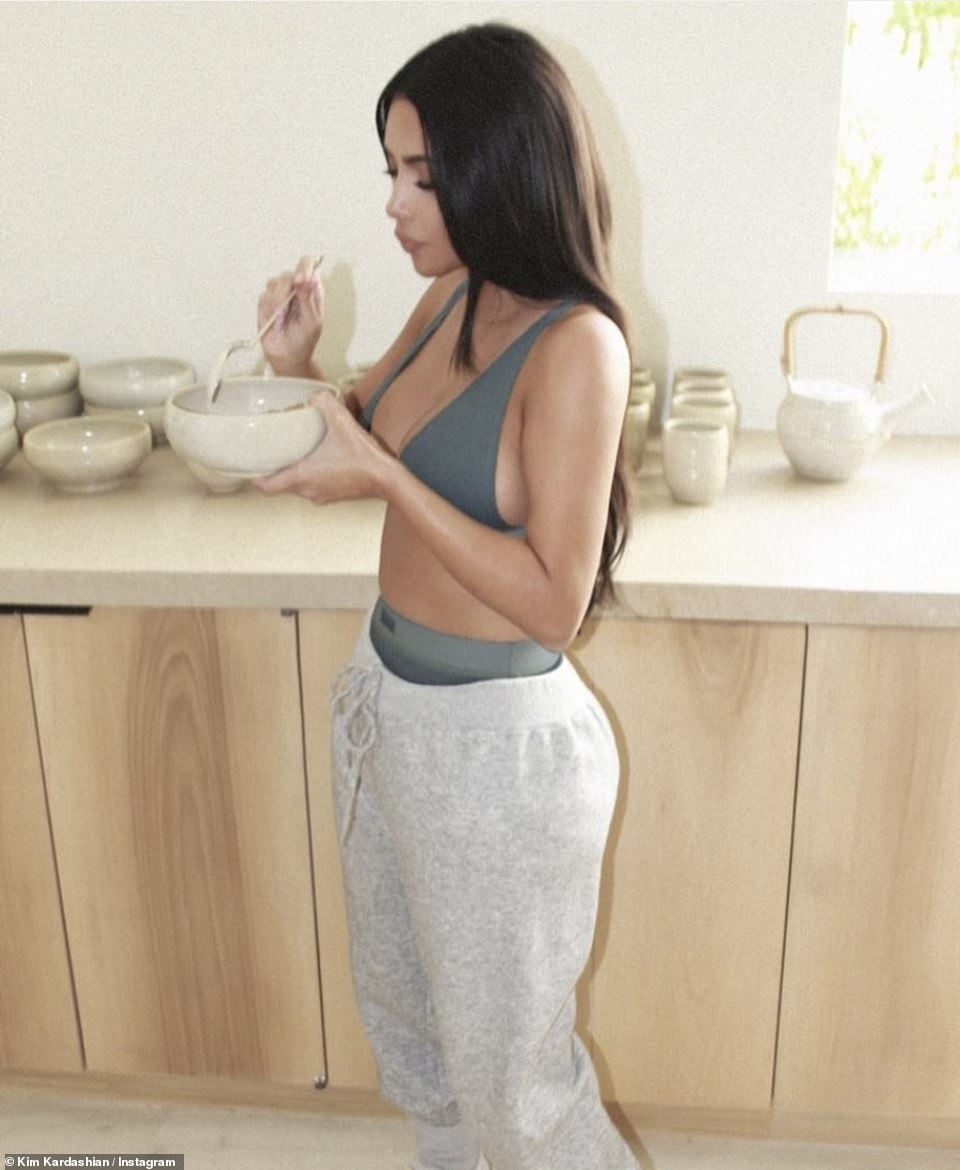 She has cereal: The reality star took to Instagram last month to show fans inside her kitchen

It’s 50 shades of grey for Kim Kardashian at the moment!

The TV star has been plugging her new Skims lingerie label to aplomb and her latest effort is no exception.

Kim wore the cotton plunge bra from her new collection – a style designed for ultra comfort.

Combining the natural breathability of cotton with high-tech Powermesh support, you really will forget you’re wearing this bralette, and it’s available in a range of colours.

Click right to snap it up for yourself by joining the waiting list or check out the alternative options below from Sloggi, Intimissimi , Gap and Calvin Klein.

* PRICES MAY NOT BE AS ADVERTISED 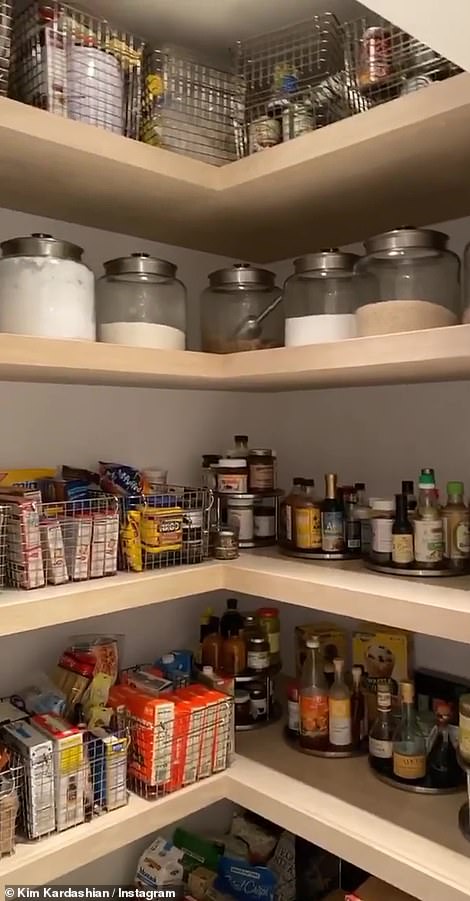 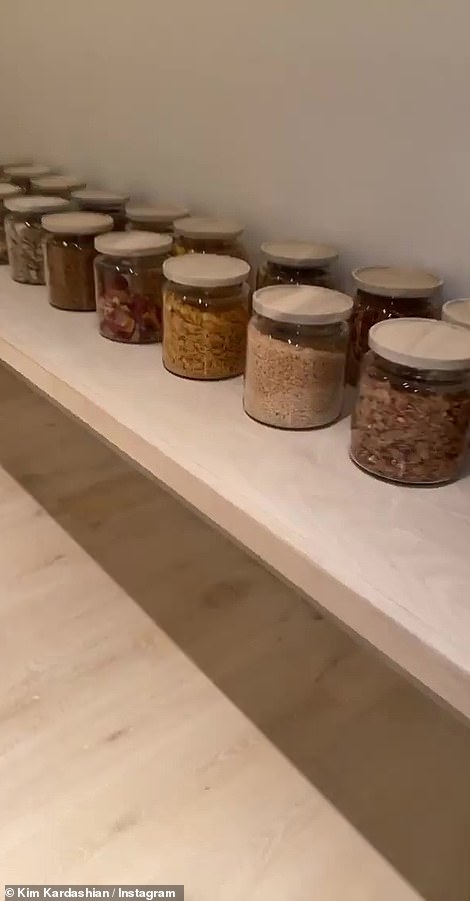 Everything has a place: Inside Kim’s kitchen cabinets, which are designed so everything can be seen at once

While she wasn’t happy about the delay, Kim is clearly delighted with the results, agreeing that she loves taking selfies in the bathroom’s perfect light.

‘The lighting in the bathroom is so good that it like smooths out all cellulite,’ Kim explained, saying they bought a full ceiling lighting panel, inspired by one in the Chanel store.

‘I start my day off getting in the shower feeling so good about myself, thinking like ‘oh my god I really, like, I’ve been working out so hard my cellulite it’s been going away,” she revealed. ‘And then I just go in the closet later to get dressed and I realize it was just the lighting.’ 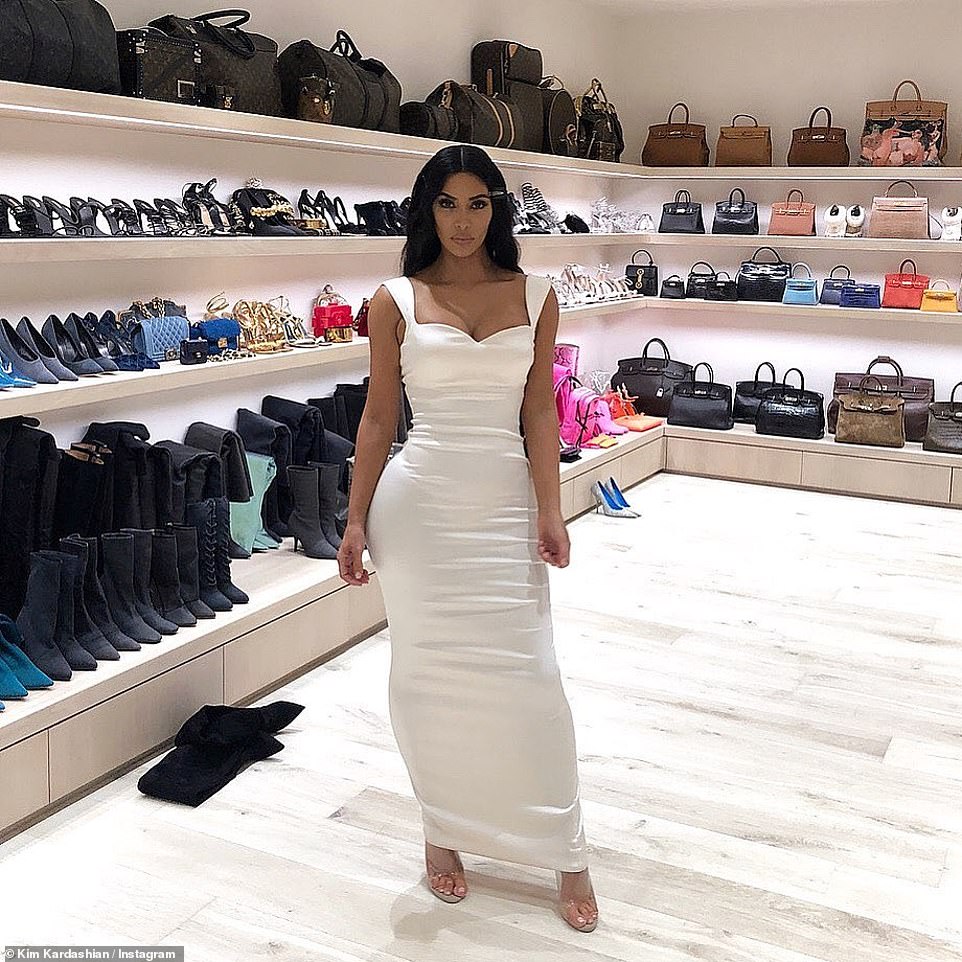 Her dream closet: Kim has also shown off the inside of her walk in wardrobe, with her clothing and shoe and bag collections arranged as if they were on sale

Kim has previously shown off another one of her favourite rooms, her sprawling walk in closet, but admitted that the way Kanye organises his own wardrobe ‘gives her anxiety’.

‘It gives me full anxiety, ’cause then you have to steam it instead of just being hung.’ 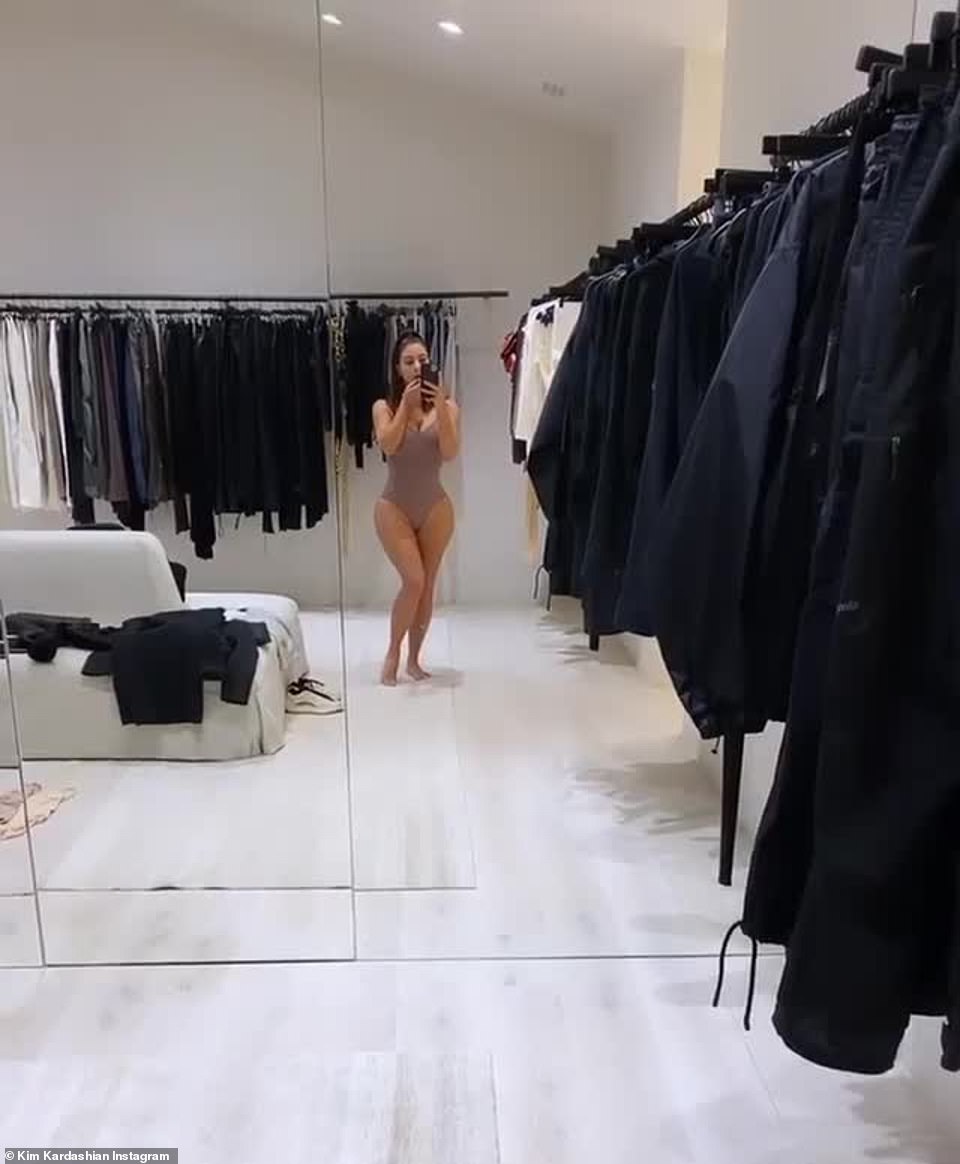 Closet selfies: Kim often gives fans a glimpse inside her wardrobe as she snaps several selfies whilst getting ready

Property searches double for the Cotswolds in lockdown

Most inexpensive home for sale on Zoopla costs ₤ 29,950